Unemployment has fallen, and the stock market has soared. So why has the economic expansion since the recession been so tame, with sluggish productivity and, at least until recently, anemic wage growth? 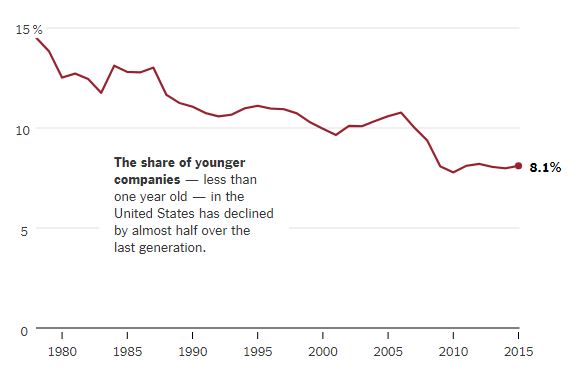 Economists say the answer, to some degree, can be found in a start-up slump — a decline in the creation of new businesses — and a growing understanding of what’s behind it.

A total of 414,000 businesses were formed in 2015, the latest year surveyed, the Census Bureau reported Wednesday. It was a slight increase from the previous year, but well below the 558,000 companies given birth in 2006, the year before the recession set in.

“We’re still in a start-up funk,” said Robert Litan, an economist and antitrust lawyer who has studied the issue. “Obviously the recession had a lot to do with it, but then you’re left with the conundrum: Why hasn’t there been any recovery?”

Many economists say the answer could lie in the rising power of the biggest corporations, which they argue is stifling entrepreneurship by making it easier for incumbent businesses to swat away challengers — or else to swallow them before they become a serious threat.

“You’ve got rising market power,” said Marshall Steinbaum, an economist at the Roosevelt Institute, a liberal think tank. “In general, that makes it hard for new businesses to compete with incumbents. Market power is the story that explains everything.”

That argument comes at a potent political moment. Populists on both the left and right have responded to growing public unease about the corporate giants that increasingly dominate their online and offline lives. Polling data from Gallup and other organizations shows a long-running decline in confidence in banks and other big businesses — a concern not likely to abate after high-profile data breaches at Equifax and other companies.

The start-up slump has far-reaching implications. Small businesses in general are often cited as an exemplar of economic dynamism. But it is start-ups — and particularly the small subset of companies that grow quickly — that are key drivers of job creation and innovation, and have historically been a ladder into the middle class for less-educated workers and immigrants.

Perhaps most significant, start-ups play a critical role in making the economy as a whole more productive, as they invent new products and approaches, forcing existing businesses to compete or fall by the wayside.

“Across the decades, young companies are really the heavy hitters and the consistent hitters in terms of job creation,” said Arnobio Morelix, an economist at the Kauffman Foundation, a nonprofit in Kansas City, Mo., that studies and promotes entrepreneurship.

The start-up decline might defy expectations in the age of Uber and “Shark Tank.” But however counter intuitive, the trend is backed by multiple data sources and numerous economic studies.

In 1980, according to the Census Bureau data, roughly one in eight companies had been founded in the past year; by 2015, that ratio had fallen to fewer than one in 12. The downward trend cuts across regions and industries and, at least since 2000, includes even the beating heart of American entrepreneurship, high tech.

Although the overall slump dates back more than 30 years, economists are most concerned about a more recent trend. In the 1980s and 1990s, the entrepreneurial slowdown was concentrated in sectors such as retail, where corner stores and regional brands were being subsumed by national chains. That trend, though often painful for local communities, wasn’t necessarily a drag on productivity more generally.

Since about 2000, however, the slowdown has spread to parts of the economy more often associated with high-growth entrepreneurship, including the technology sector. That decline has coincided with a period of weak productivity growth in the United States as a whole, a trend that has in turn been implicated in the patterns of fitful wage gains and sluggish economic growth since the recession. Recent research has suggested that the decline in entrepreneurship, and in other measures of business dynamism, is one cause of the prolonged stagnation in productivity.

What is behind the decline in entrepreneurship is less clear. Economists and other experts have pointed to a range of possible explanations: The aging of the baby-boom generation has left fewer Americans in their prime business-starting years. The decline of community banks and the collapse of the market for home-equity loans may have made it harder for would-be entrepreneurs to get access to capital. Increased regulation, at both the state and federal levels, may be particularly burdensome for new businesses that lack well-staffed compliance departments. Those and other factors could well play a role, but none can fully explain the decline.

More recently, economists — especially but not exclusively on the left — have begun pointing the finger at big business, and in particular at the handful of companies that increasingly dominate many industries. 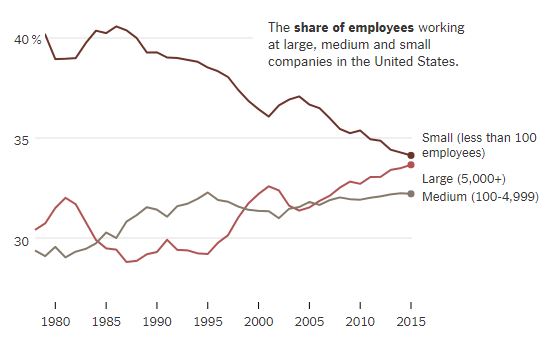 The evidence is largely circumstantial: The slump in entrepreneurship has coincided with a period of increasing concentration in nearly every major industry. Research from Mr. Haltiwanger and several co-authors has found that the most productive companies are growing more slowly than in the past, a hint that competitive pressures aren’t forcing companies to react as quickly to new innovations.

A recent working paper from economists at Princeton and University College London found that American companies are increasingly able to demand prices well above their costs — which according to standard economic theory would lead new companies to enter the market. Yet that isn’t happening.

“If we’re in an era of excessive profits, in competitive markets we would see record firm entry, but we see the opposite,” said Ian Hathaway, an economist who has studied the issue. That, Mr. Hathaway said, suggests that the market is not truly competitive — that existing companies have found ways to block competitors.

Experts also point to anecdotal examples that suggest that the rise of big businesses could be squelching competition. YouTube, Instagram and hundreds of lower-profile start-ups chose to sell out to industry heavyweights like Google and Facebook rather than try to take them on directly. The tech giants have likewise been accused of using the power of their platforms to favor their own offerings over those of competitors.

Most recently, Amazon openly called for a bidding war among cities for its second headquarters — hardly the kind of demand a new start-up could make. Mr. Morelix said the Amazon example was particularly striking.

“We’re saying that it’s O.K. that they shape how a city charges taxes?” Mr. Morelix said. “And what kind of regulations they have? That should be terrifying to anyone that wants a free market.”

In Washington, where for years politicians have praised small businesses while catering to big ones, issues of competition and entrepreneurship are increasingly drawing bipartisan attention. Several Republican presidential candidates referred to the start-up slump during last year’s primary campaign. Progressive Democrats such as Senators Elizabeth Warren of Massachusetts and Amy Klobuchar of Minnesota have pushed for stricter enforcement of antitrust rules. In a speech in March, Ms. Klobuchar explicitly tied the struggles of entrepreneurs to rising corporate concentration.

In July, entrepreneurs achieved a mark of political relevance: their own advocacy group. The newly formed Center for American Entrepreneurshipwill conduct research on the importance of new businesses to the economy and push for policies aimed at improving the start-up rate. Its founding president, John Dearie, comes from big business — he was most recently the acting head of the Financial Services Forum, which represents big financial institutions.

By Ben Casselman for nytimes.com